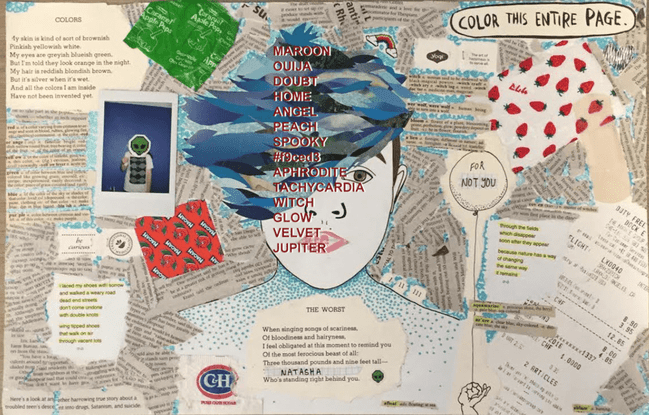 Moving to Napa
I filled my car with the 12 boxes that contained my material life and began heading north. I drove for hours, leaving behind all my friends, my school, my mother, and my home. I kept driving until the wheels of my car disconnected from the ground beneath me, and as I approached the valley of vines, I floated in. This song tastes like gas station sandwiches and a half-asleep haze.

Waking Up Next to Friends
The alarm on my phone woke us up at 7:00 am with almost enough time to get ready for school. We laid side by side, it was just bright enough to see. I pulled out my phone from under my pillow to play music while we got up and dressed. This is the song that began to play. As we laid side by side, and this song hummed out of my phone, I looked at her and felt privileged to have such a beautiful friend. This song tastes thick but sweet, like heavy whipping cream; it is gray and stormy and tired.

My Sister’s Birth
She’s my little freckle faced fidgeter, she’s me but miniature. I’ve left her notes in the walls of the Coliseum and in bookstores in France, on the Love Lock Bridge and Zoo Zurich. I will always be strong enough to carry her, and I will always make her pancakes. This song tastes like cheddar bunnies and sand boxes.

First Trip Alone
This was my first real trip on my own, I treked halfway across the world with a handful of Swiss Francs and a Kinder Egg. I spent my days alone wandering the city, I could get around but I was always scared to venture farther than a hop on the 63 bus. One day I pushed the limits and got on the 2 up to the top of the city, to the street kitty corner of Zoo Zurich. The bus took a little over an hour, the whole time I was worried I was headed the wrong direction. As I reached the top of the city, it began to snow, and I scraped patterns into the tops of cars with my finger tips. There is a surreal feeling accompanying walking alone through a snowing zoo, all the while I was listening to this album on repeat. This song tastes like the the strawberry gummies I bought from a vending machine and the frozen whip cream on top of a Cornetto; it was ghostly and quiet except for the chatter of the animals.

Amanda Palmer Concert
The best friends I’ve ever made have been made standing in line for concerts. I showed up four hours early to wait in line and instantly fell in love with the people around me. We used chalk to draw messages of love on the side of the church next to us, and swapped stories of getting hit by a car and cave diving. A boy named Aiden and I walked up and down the three block long line into the venue playing and singing Ukulele Anthem. We stood in a circle and a girl asked me my favourite Amanda Palmer song and I told her Lost. She began strumming it on her ukulele and we all sang along. This song tastes like chalk and blue slurpees.

My Molting
I’ve wanted to cut my hair short ever since my early childhood. When I was alone I would pin it up with bobbles, push it into hats, or gel it back. I would go through phases of being convinced the day would come where I’d molt 14 inches of hair, but between my parents not letting me and my lack confidence, I never did. But sometimes you realize enough is enough, sometimes you just decide to make the appointment, sometimes there is no catalyst or plot climax. Sometimes you just need to cut it all off. As I sat in swivel chair in Downtown Encinitas, this song played. This song tastes like barbicide.

Wesleyan
My time at Wesleyan University contains some of the most accomplished but quiet memories I have. To me, this was a peak of complete capability, this was a time I spent working, only working. But with hours upon hours of work, comes hours upon hours of quiet. Quiet library, quiet classroom, quietly pulling apart the plastic labels of water bottles. I didn't ever want to go back to real life, I just wanted to live in this quiet paradise and keep learning. This song tastes like quiet.
Powered by